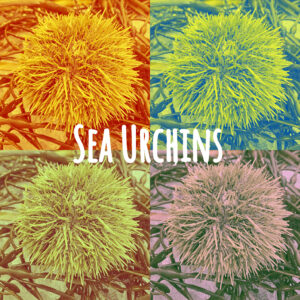 Atlantic Green Urchins are found along the coast of Maine through the Canadian Maritimes. Interestingly enough, the word “urchin” came from the Old English for hedgehog. This makes perfect sense being how they are both incredibly spiny! Urchins live in shallow, rocky subtidal waters where they graze on plant and animal materials. They are mostly scavengers and feed in dense concentrations. They are Echinoderms, a group of marine invertebrates that also includes starfish, sea cucumbers, sea lilies, and brittle stars. Urchins have a shell-like structure that is called a “test”. If you have been lucky enough to find a whole “test”, you will know that they are delicate and have a beautiful bead-like design running down their sides.

Sea urchins have many predators; crabs, fish, birds and humans. The edible part of the urchin, although commonly referred to as the “roe” or the Japanese word for it “uni” is actually the gonads of the urchin. It lies within the shell in five orange-like sections. Nutrients are stored in these segments and when food is scarce, the urchin will utilize them for energy. Depending on their diet, the color of the “roe” ranges from a bright turmeric-like color to orange to gray and colors in between. A light yellow color is considered to be the highest grade, light orange being next in line. As we all know, taste can be a difficult thing to describe, but many will agree that it is not quite as briny as an oyster and that it has an “umami-salty sweetness”. Uni can vary in flavor by what they have eaten and even their gender. The texture is buttery thick, creamy and rich. It is most commonly eaten as is but can also be used as a flavor enhancer in soups, risotto, pasta, and seafood dishes to name a few. In Maine, the season for urchin is September through March, peaking in winter. During this time, Harbor Fish Market sells uni that is locally processed and vacuum-packed with sea water which keeps the uni at its freshest and sweetest. Be assured that the urchin fishery here in Maine, is closely managed with restrictive harvesting rules. Now that you know a bit more about urchins and uni, come on down the wharf and give it a try.