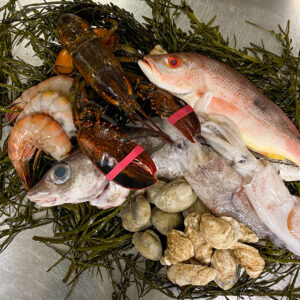 Cioppino, the Genoese tomato based stew made of a melange of seafood, was brought to the San Francisco area by Italian immigrant fishermen in the late 1800s. The fishermen would use whatever seafood was left over from the day’s catch. Crab, shrimp, clams and fish were combined with onions, garlic and tomatoes, and a combination of herbs, olive oil and wine. It was a dish originally prepared in the fisherman’s homes and on the wharf but quickly became popular at local restaurants. There are several stories of where the name came from, the most fun one is that the fishermen would all “chip in” whatever catch leftovers they had. However, the more likely explanation is that it comes from the Northern Italian word “ciuppin” which means “to make soup from fish”. The French gave us Bouillabaisse. A traditional fish stew that originated in the Mediterranean city of Marseille in Provence. Just like cioppino’s origins, it was made by the local fishermen, utilizing the Mediterranean’s bounty, such as, eel, rockfish, monkfish, urchins, mussels, crab and octopus. Local vegetables such as leeks, onions, tomatoes, celery, and potatoes were thrown together to make up the broth. What really makes the broth unique is the flavors derived from saffron, fennel seeds, and orange zest. The broth is served with a “Rouille”, a sauce consisting of egg yolk, olive oil, breadcrumbs, garlic, saffron and cayenne pepper that is spread onto slices of grilled bread. What we can say for sure, is that both are absolutely delicious and our knowledgeable employees at Harbor Fish Market can help you choose the best and freshest ingredients whether you choose to make Bouillabaisse or Cioppino. Buon Appetito and Bon Appetit!