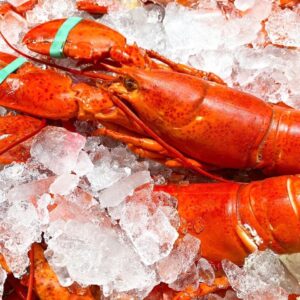 You may have heard the term ‘shedders’ if you have been buying Maine lobsters this summer. It’s a term used to describe a lobster that has shed it’s shell, and developed a new shell, which is now soft. These lobsters are also called new shells or soft shells. Makes sense. This usually happens early summer to early fall and then over the course of the winter, their shells will become hard again.

The reason lobsters shed their shell is so they can grow a new and bigger shell. It’s called molting. In the first seven years of their life, lobsters may molt 10-20 times and then beyond that about once a year. It’s an amazing process, as the lobster will shrink its soft body in order to release their old shell, and maintain that shrunken body for a while so that they won’t need to molt again too soon. If you were to touch a molting lobster, they would feel like jello! They are very vulnerable during this process and will stay hidden until their shell starts to harden. The warmer the water temperature, the faster the shell will harden. The lobster will sometimes eat their own shell to hasten the process, as it’s loaded with calcium. Lobsters can also regenerate their claws, eyes and antennae.

Some consumers love shedders because they are so easy to crack, just use your hands, but the lobster will not be as full of meat as a ‘hard’ shell lobster. The meat often tastes sweeter in a shedder, some lobster connoisseurs say. Either way, soft shell or hard shell, we can all agree that Maine lobsters are the best no matter what type of shell they have!